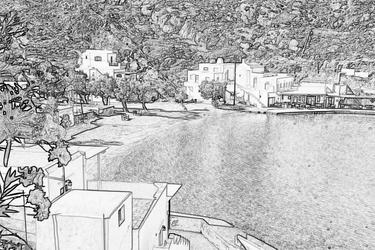 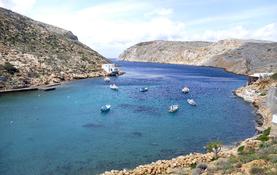 I CAN BREATHE now.

There’s little enough else to do in this Greek fishing village where my husband and I have just arrived. At the north end of the island of Sifnos, it consists of a handful of houses, two tavernas, an old potter’s shop, a small mini-mart and more wooden boats than all of those combined. Nestled together around the inner end of a long narrow bay, the most excitement I’ve ever seen here – other than goats prancing across the sunburnt rocks high above the village and the odd fisherman tending to his nets at the sea’s edge – was that time that all of the town’s men pushed a freshly painted boat into the bay and a loud and good-natured game of shoving and splashing broke out.

But what this village lacks in size and hustle—Xeronissos, it’s called—it more than makes up for in beauty.  There’s the finger of clear aquamarine sea that reaches far inland. The soft sand beach at its end. The gentle waves rippling across it. The curving sweep of dusty caramel-coloured hills that stand guard. The white cube houses that tumble down their sides toward the shore. The wooden fishing boats that bob atop water so crystalline clear you’d be forgiven for swearing they are flying. And dancing over it all, that sparkling Aegean sunshine, the brilliant light of Apollo.

The previous four times that we, two Canadian travellers, have come to Sifnos, we’ve stayed in Apollonia, the island’s main town, never really thinking of going anywhere else. But the decision to find accommodation in Xeronissos instead the next time we'd return happened in a snap. It was about sixteen months ago, we’d come up to this village for a final lunch at our favourite taverna, had long finished our meal, but couldn’t face leaving yet. So we strolled the short path past the dock, toward the lone house on the west side of the shore, and sat on some rocks out there. “Should we come back to Sifnos next year?” Jim said.

That question almost didn’t need to be asked.

“What would you think about staying in Xeronissos?” he asked next.

My yes to that was instant. Though I hadn’t thought of it before, I could see what a great idea he’d had. Traditional villages like this are a dying breed. How rare a privilege it would be to live in one, if only for a short while.

NOW, AFTER all this travel—a flight across the Atlantic, a night in an Athens hotel, a ferry ride and then the twenty-minute drive from the port a few kilometres away—here we are. After dropping our bags off at the apartment, we came straight here, of course, to this taverna. This was always going to be our first stop. We’ve barely sat down when “Kaliméra! Kaliméra!” rings out from inside. “Hello! Hello!”

Jim and I jump up. We’ve been waiting for that voice, knew it wouldn’t take long before we’d hear it. It belongs to Antonis, the owner of this taverna, and is always so filled with enthusiasm, warmth and joy.

“Georgia told me it was today you were coming!” he says.

I thought he might hear that from our landlady. That’s how it happens in a place like this.

His round face is beaming and with his sturdy arms, he gives us both hugs. Now he calls into the taverna and right away I hear his wife Stella’s quick footsteps. Shortly another round of kaliméras follows. Though quieter and less sure of her English than he, she is equally warm and kindness lives deep in her eyes. Today as ever her face is wreathed in that sweet smile. We’re all so happy to be back together again, anyone can see. Their waiter who I’ve never seen here before, a tallish man in jeans and one of the taverna’s deep blue t-shirts, definitely takes notice.

Antonis and Stella don’t have long to talk, never do, at least at this time of day. They have people to feed, a taverna to run and all the jobs that entails. They go back to the kitchen, rooted against the rocky hill that forms its rear wall. Jim and I return to our usual spot at a table near the front door on the terrace at the water's edge.

We have a month now and our own jobs to do. The atmosphere to soak up. The warmth to take in. The sea. The sun. The peace. Shortly, a dripping cold beer. And in due time, our lunch. The cucumbers crisp and smelling of summer. The kalamari chewy and briny. The tomatoes sweet and warm. The Sifnos cheese as soft and spreadable as ever on a thick slab of bread.

We’ll dig in when it comes. Though we have not a drop of Greek blood between us, there’s no doubt that here in Xeronissos, Jim and I once again are back home.

Purchase this book on Amazon.